Peoples Rx–Austin's Favorite Pharmacy > Bone Health > Ask the ND: The Best Kind of Magnesium For You

Ask the ND: The Best Kind of Magnesium For You 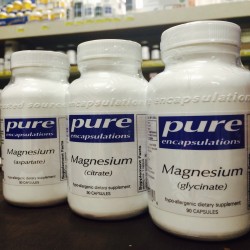 Check out the updated version of this blog from 2021 here!

One thing you’ll notice about supplements is that everyone is pretty convinced that their product is “THE BEST”! However, it’s a little hard to believe when every product on the shelf claims the same thing. You would think something like magnesium, which is a mineral, would be pretty straightforward. Naturally, that is not the case at all. Nothing is straightforward about it and sadly, there is no easy answer as to what is the best kind of magnesium, other than to answer what is the best kind of magnesium for you.

What Is Magnesium Anyway?

Magnesium (Mg) is a mineral that is involved in almost every process in your body from muscle relaxation and proper muscle movement to hormone processing. Clinically it is used to treat muscle cramps, restless leg syndrome, high blood pressure, constipation and chronic stress. Magnesium is pretty much everywhere – it’s the fourth most abundant element in the earth as a whole and the ninth in the universe as a whole. Magnesium is also highly water-soluble and is the third most common element dissolved in sea water. Generally, the composition of sea water and the composition of our bodies internal mineral balance is reasonably similar (although sea water is significantly higher in sodium) and, as humans, we function best when we have a rich supply of magnesium in our system. Magnesium is the center of the chlorophyll molecule in plants, so any dark green plant is a rich source. Magnesium is central to all of our energy-forming reactions in every cell in the human body and there are over 300 enzyme pathways in humans that are dependent on magnesium to run.

Historically magnesium would have been a larger part of the human diet – partially as a mineral dissolved in spring water (which city water is not likely to have) and partly because the average human diet would have had a higher proportion of green vegetables.

How Do I Find The Best Kind of Magnesium For ME?

Magnesium can’t just be by itself as a molecule – it needs to be bound to something else to be stable, so the biggest difference in different magnesium products comes not from the magnesium itself (which is all the same) but from the molecule it’s bonded to.  The most common bonding agents I’ve seen are oxide, citrate, glycinate, sulphate or amino acid chelate. There are two things to look for about the molecule it’s bonded to: size, and function. There is the secondary consideration of absorption.

The size of the molecule matters because most people don’t want to take a tablespoon of something, they usually want to take a reasonably small amount – like maybe the amount that will fit into one or two capsules.  Magnesium itself is a very small molecule, but if it’s bonded to something large and floppy then you get a very small amount of magnesium, mixed in with a pretty large amount of something else.  So magnesium by weight is higher if it’s bonded to an extremely small molecule (like oxygen in Mg oxide) than if it’s bonded to a large molecule like glycine (in Mg glycinate) or an amino acid (in magnesium amino acid chelate). Citrate and sulphate molecules are somewhat in the middle for size.

The function of the additional molecule is also something to consider. Oxygen is obviously useful to body tissues, as are amino acids, but some amino acids have functions that may enhance one particular effect of the magnesium that you might be looking for clinically. We’ll go over different forms of magnesium individually.

Absorption is a separate concern. Magnesium itself is reasonably poorly absorbed (35% absorbed in the worst case scenario and 45% absorbed in the best). Generally if you are magnesium-depleted then your body will absorb any magnesium better than it would otherwise.  Calcium and magnesium compete for absorption, so if you take calcium and magnesium together they will both compete with each other (meaning you will absorb less of each). Also high or low protein intake can reduce magnesium intake as well as phytates from some vegetables. Generally if you’re taking a magnesium supplement it’s best on an empty stomach. Magnesium also absorbs well through the skin (potentially far better than through the digestive tract), so Epsom salt baths (magnesium sulphate) and magnesium lotions, gels or oils (usually magnesium chloride) can be a great way to increase your body stores. Topical forms can be best if you’re using magnesium for it’s muscle relaxation and calming properties.

Orally, magnesium citrate is the best absorbed form (but it’s bonded to a big molecule so there is a smaller amount of magnesium by weight). Mg oxide is the most poorly absorbed form but has the highest Mg per weight, so actually you may get more elemental magnesium out of the same dose of Mg oxide vs. another magnesium, simply because of the size. The other forms of magnesium are somewhere in the middle in terms of absorption.

What Are The Benefits of Different Types of Magnesium?

Magnesium Oxide (MgO) is simply bonded to oxygen, which is obviously also something your body needs so there is nothing unnecessary in the product. The oxygen is useable by your body but will not strongly affect the way you feel taking the Mg. This is the least absorbed form, but also has one of the highest percentages of elemental magnesium per dose so it still may be the  highest absorbed dose per mg. This is a great general purpose magnesium if really Mg is all you need.  It makes a simple muscle relaxer, nerve tonic and laxative if you take a high dose. This Magnesium Oxide product from Aerobic Life is great.

This is one of the most common forms of Mg on the commercial market. This is Mg bonded to citric acid, which increases the rate of absorption. Citrate is a larger molecule than the simple oxygen of oxide, so there is less magnesium by weight than in the oxide form. This is the most commonly used form in laxative preparations. We like this form of Mag Citrate from Pure Encapsulations.

In this form, Mg is bonded to the amino acid glycine. Glycine is a large molecule so there is less magnesium by weight, but the glycine itself is a relaxing neurotransmitter and so enhances magnesium’s natural relaxation properties. This could be the best form if you’re using it for mental calm and relaxation. Magnesium amino acid chelate is usually bonded to a variety of amino acids, which are all larger molecules. In this form there is less magnesium by weight but the individual amino acids could all be beneficial for different things. Every formula is different so if you need both Mg and a particular amino acid, then this could be the way to go. MagTech is a great option.

This is a less common form, and is typically taken for cardiac conditions and heart function in general. Magnesium helps the heart muscle relax, as well as the blood vessels that feed the heart to open and deliver more blood to the heart tissue itself. Taurine is an amino acid that is known to feed cardiac muscle and enhance the quality of contractions of the heart so if you’re taking Mg for heart function this is probably the best form for you. Again, taurine is a larger molecule so there is a lower Mg by weight. Cardiovascular Research makes a great Magnesium Taurate.

These forms are both typically used topically, although there are some oral preparations as well. Mg sulphate is best known as Epsom salts. If you’ve taken this internally you know it tastes horrible and has a very strong laxative effect, but when used in a bath or soak it is extremely relaxing to the muscles and can ease aches and pains. Epsom salts baths can also help to lower high blood pressure and reduce stress levels. Magnesium chloride is more common in the lotion, gel and oil preparations that can be used topically for muscle cramps and relaxation.

Generally magnesium is one of those universally necessary elements that needs to be in your body for proper function, no matter what. Great dietary sources include coffee, tea, chocolate, spices, nuts and, of course, green vegetables with chlorophyll. Good body stores of magnesium will improve your health, mood and general functioning so finding the best kind of magnesium for you is tremendously important.

Magnesium L-threonate A newer player on the magnesium front is magnesium threonate, or magnesium L-threonate. This form effectively crosses the blood brain barrier and so has recently been studied for uses such as patients with Alzheimer’s disease and other forms of cognitive decline.  A recent research study published in the medical journal Neuron showed that magnesiumthreonate creates improvement in learning abilities, working memory and both short and long term memory.  Additionally it has the same benefits as any other magnesium including enhancing sleep quality.

The Perfect Snack for Outdoor Adventures (previous entry)
(next entry) Learn Your Trigger Foods, Get “Food Fit!”
Related Posts
Strategies for Immune Support on Vacation
Ask the ND: Can I Reduce Blood Pressure Naturally?
Which magnesium is right for you?
Comments

567 Responses to Ask the ND: The Best Kind of Magnesium For You